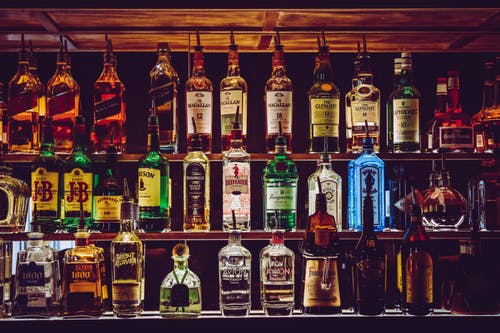 The origins of the families behind brands like Bacardi, Suntory and Campari stretch as far back as hundreds of years.

Even if liquor isn’t always quicker, it can make your family very wealthy over time.

The world’s enduring thirst for their light rum has pumped billions of dollars into the family’s coffers since 1862, enriching hundreds of clan members now spread across the globe. About 6 million Bacardi rum and Cokes are thrown back every day, and the popularity of that classic cocktail known as the Cuba Libre helped Bacardi Ltd. sell 17 million cases of its eponymous spirit in 2017.

It’s no less a family affair if your preferred tipple is a Negroni, made with one part Campari, profits on which flow to Italy’s Garavoglia family. A Cosmo? If your triple sec is Cointreau (and it probably is), France’s Heriard Dubreuils take a cut. It’s a similar story for whiskey, from Kentucky’s Brown family of Jack Daniel’s fame to Japan’s Saji and Torii clan who own Jim Beam through Suntory. The Beckmann family own Jose Cuervo, the world’s best selling tequila. And then there are the Ricards, the French family behind the Pernod and Ricard aperitifs, as well as Jameson whiskey and Absolut vodka.

These drink dynasties, whose origins stretch back 1,300 years, reflect the extent to which families retain a firm grip on the industry, even though many of their companies have gone public over the years. Their outsize level of control and ownership relative to other businesses has proved to fabulously profitable. Seven of the world’s richest spirit families hold stakes worth about $70 billion combined, according to calculations by the Bloomberg Billionaires Index. 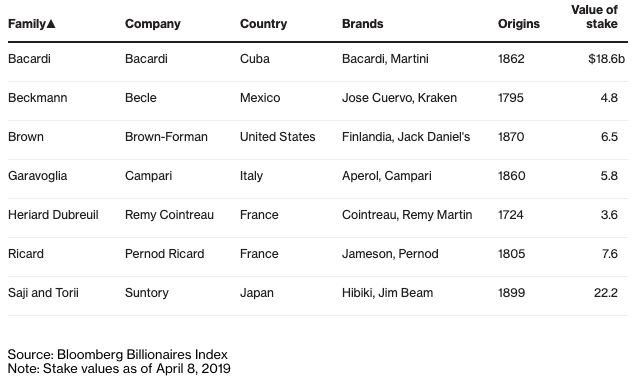 The nature of the spirits industry requires long-term planning and is therefore especially suited to family ownership, according to Alexandre Ricard, chief executive officer of Pernod Ricard SA and grandson of Paul Ricard, who invented the clan’s eponymous pastis in 1932.

“We carry billions of euros of strategic stock inventory, with an average age of seven years,” he said. “Its a long-term industry by nature.”

Just this month, the company unveiled its sustainability and responsibility roadmap — for 2030.

It’s a common refrain. “Having a long-term-focused, committed, engaged stockholder base, anchored by the Brown family, gives us an important strategic advantage, particularly in a business with aged products and multi-generational brands,” said Elizabeth Conway, a spokeswoman for Brown-Forman Corp., the maker of Jack Daniel’s.

Even as cocktails and straight spirits grow in popularity with a younger generation of drinkers, it may be getting more difficult to keep such businesses all in the family. Consolidation has been rife and the ability to reinvest and acquire attractive brands is a much easier ask if you’re the size of industry leader Diageo Plc, with $12 billion of annual revenue and brands like Johnnie Walker and Smirnoff.

A cautionary example might be the Bronfmans, who built their fortune in Canadian whisky during Prohibition. Their Seagram Co. remained one of the world’s largest owners of alcoholic-beverage lines into the 1990’s. But an ill-fated pivot into the entertainment industry overseen by Edgar Bronfman Jr., from the third generation of owners, ultimately led to a breakup and sale, with the beverage division going to Pernod Ricard and Diageo in 2000.

Now, Pernod Ricard itself is being targeted by activist Elliott Management Corp., which is pressing for cost cuts and overhauling corporate governance. The hedge fund’s involvement has prompted some analysts to speculate that Pernod could fall prey to a joint bid from Diageo and billionaire Bernard Arnault’s LVMH Moet Hennessy Louis Vuitton SE.

That couldn’t be further from the truth, said CEO Ricard.

“Pernod Ricard is an independent company and an industry consolidator,” he said, noting how critical the family’s long-term, consumer-driven approach has been to the firm’s growth and current market value of $48 billion.

Still, the $5.1 billion valuation tequila maker Patron fetched when Bacardi bought it at the start of last year underscores the financial firepower required to compete in the industry. The world’s largest privately owned spirits company loaded up on $3.5 billion of debt to pay for the deal, which resulted in a credit downgrade from ratings agency Moody’s.

The Bermuda-based company now has annual revenue of about $4.1 billion after adding Patron to a collection of brands that also includes Grey Goose vodka, Bombay Sapphire gin and Martini vermouth. The family’s holdings are worth about $19 billion, according to calculations by the Bloomberg Billionaires Index. Bacardi is a frequent subject of speculation that it may pursue an initial public offering.

“They have some of the biggest brands in the world,” said Duncan Fox, a Bloomberg Intelligence analyst in London. “There would be plenty of demand if they ever went public.”

The family has shown little appetite for an IPO and its ability to raise financing for the Patron deal suggests there’s no pressing need. The company isn’t planning to cut its dividend despite the extra debt load, Moody’s said.

relates to Booze Dynasties Control $70 Billion of World’s Liquor Wealth
Don Facundo Bacardí Massó, a company portrait at the Aguilera Street Facility in Cuba with family members, c1940, (top), and the Bacardi rum bottling plant in 1955 (bottom).Source: Bacardi-Martini Inc. (2); Getty Images
The clan is similarly averse to publicity despite its wealth and storied past, which stretches back to 1862, when Don Facundo Bacardí Massó — the great-great-grandfather of the current chairman — bought a Cuban distillery and created a smoother, lighter rum that proved a hit with locals. One of his sons supported the first Cuban war of independence and smuggled arms for the rebels.

Almost a century later, the family’s early support for another revolutionary regime backfired after Fidel Castro’s government confiscated their assets. Jose Bosch — who married Facundo’s granddaughter and had been Cuba’s finance minister before running the company — continued operations from outside the country, and the family spent decades plotting to overthrow Castro, according to author Tom Gjelten’s “Bacardi and the Long Fight for Cuba.”

Public listings haven’t loosened the grip of the founding families at rivals like Davide Campari-Milano SpA, Brown-Forman and Remy Cointreau SA, which are still tightly controlled by their founding families.

France’s Ricard family, with a 16 percent stake, still exert considerable sway with Alexandre Ricard firmly in place as chairman and CEO. The family, which has long resisted cashing out, has one of France’s largest fortunes as proof of the wisdom of such a decision.

“Pernod Ricard is part of our family’s DNA,” Ricard said. “Our name is on every bottle.”